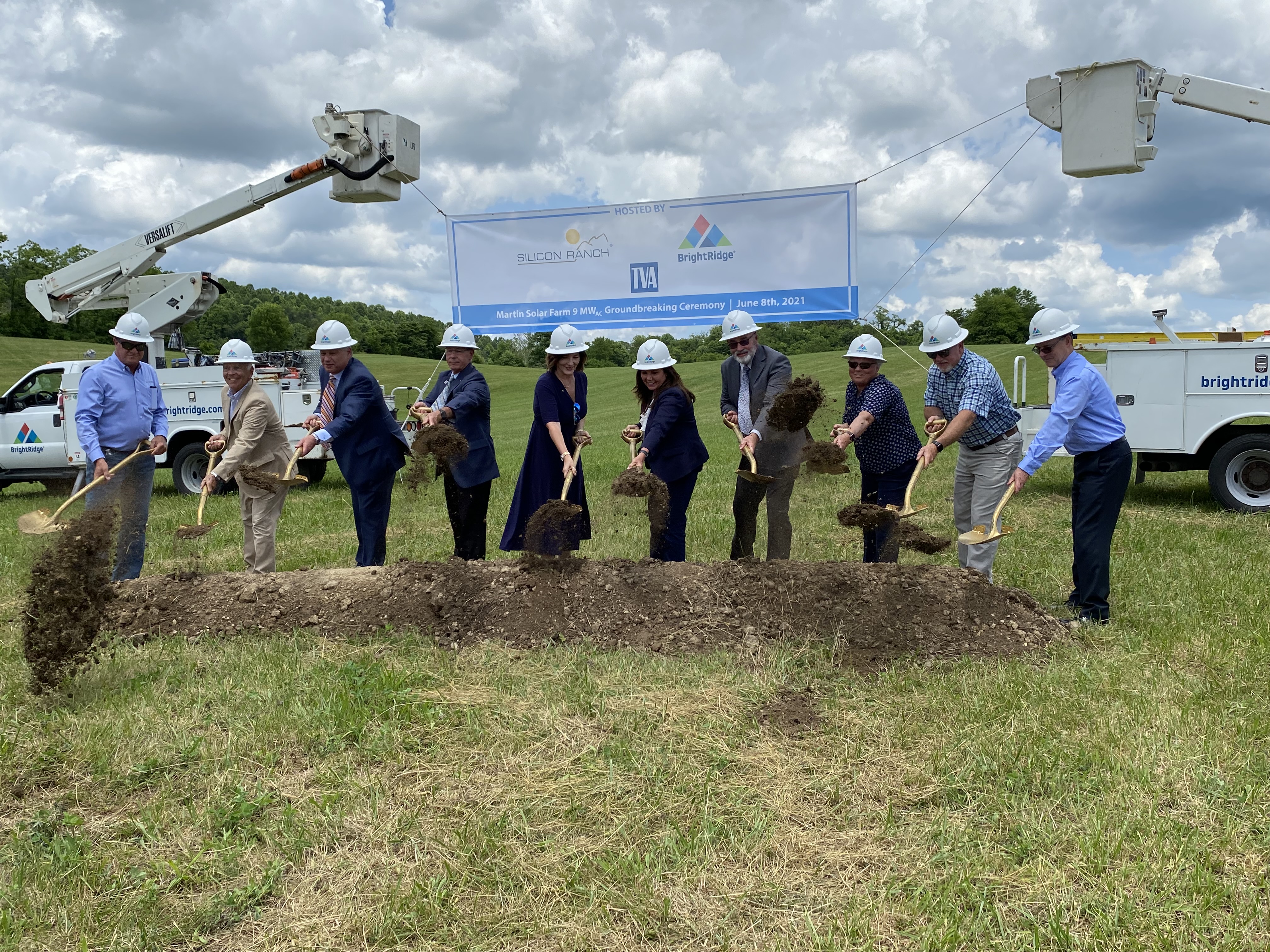 Jonesborough, TN -- BrightRidge, Silicon Ranch, and the Tennessee Valley Authority held a ceremony Tuesday to break ground on a new solar farm that is now under construction in western Washington County. The 9-megawatt (MWAC) facility will be named the Martin Solar Farm in honor of the late Ralph Martin, who served for many years as director of the local power company.
As the partners announced last September, the project is the first to enter the construction phase under TVA’s new Generation Flexibility Program that is designed to encourage local power companies (LPCs) to develop new distributed generation facilities. The Martin Solar Farm will allow BrightRidge to generate clean energy to lower costs and support community and economic development.
Joined at the site by BrightRidge directors, local and state officials, as well as U.S. Representative Diana Harshbarger and Silicon Ranch Co-Founder and Chairman Matt Kisber, BrightRidge CEO Jeff Dykes announced that energy produced by the Martin Solar Farm will be offered first to area K-12 and higher education systems interested in offsetting some of their electricity needs with cleaner energy sources.
“BrightRidge is honored to continue to lead the region in distributed solar generation, thanks to partnership agreements with TVA and Silicon Ranch,” BrightRidge CEO Jeff Dykes said. “These partnerships provide our customers with an efficient way to access clean energy benefits at scale while avoiding the long-term costs of individually owned and operated facilities. At the same time, we know access to clean energy is a key long-term driver of economic opportunity in our region.”
Silicon Ranch expects to invest several million dollars in private capital to build the Martin Solar Farm and will own and operate the array for the long-term, a disciplined approach the company takes with every project it develops. The project will be the second solar generation facility on the BrightRidge system built in partnership with Silicon Ranch and TVA. In 2019 the partners commissioned the Telford Solar Farm under the former TVA Distributed Solar Solutions program.
“Under the visionary leadership of its CEO Jeff Dykes and its board of directors, BrightRidge continues to represent the best of public power and is truly at the vanguard of the Flexibility Program here in the Tennessee Valley,” said Silicon Ranch Co-Founder and Chairman Matt Kisber. “Silicon Ranch is honored to expand our partnership with BrightRidge through this landmark project, and we applaud TVA for empowering all LPCs to leverage low-cost renewable energy to meet customer needs and recruit new business.”
TVA indicated the Martin Solar Farm is a continuation of the company’s successful long-term effort to reduce its environmental impact by diversifying its generation portfolio while maintaining affordable rates and reliability.“TVA is a low-cost carbon reduction leader, and it takes partners like BrightRidge and Silicon Ranch to help us transition into a cleaner energy future,” Doug Perry, senior vice president, TVA Commercial Energy Solutions. “TVA plans to achieve a 70% carbon reduction by 2030, and BrightRidge’s Martin Solar Farm will be a beacon to attract jobs and investment into the community.”
Silicon Ranch expects to hire approximately 150 craft workers to install a single-axis tracking system that will enable 25,000 solar panels that use advanced bi-facial technology to follow the sun across its daily arc.
“Today’s announcement is fantastic news for East Tennessee,” said Congresswoman Diana Harshbarger. “This investment will create more jobs in our community and hopefully attract further investments down the road. I’d like to thank Jeff Dykes and the team at BrightRidge for their support to our community.”
As it does with all projects, Silicon Ranch will focus on hiring workers from the local community and surrounding region. Once construction is complete in late 2021, the project will produce enough carbon-free electricity to help power more than 1,000 homes. In addition, Silicon Ranch will contribute significant tax revenues that are accretive to the local tax base and help support the local school district.

About BrightRidge
BrightRidge is the 10th largest public power provider in the Tennessee Valley Authority system and serves more than 80,000 customers in Washington, Sullivan, Carter and Greene counties. BrightRidge Broadband offers nation-leading 10 GB symmetrical internet to more than 4,200 fiber to the premise customers.

About Silicon Ranch Corporation
Silicon Ranch is the U.S. solar platform for Shell and one of the largest independent solar power producers in the country, with more than 140 operating facilities across more than 15 states coast to coast. Silicon Ranch owns and operates every project in its portfolio and has maintained an unblemished track record of project execution, having successfully commissioned every project it has contracted in its history. In recognition of its holistic approach to land management, which the company has trademarked Regenerative Energy®, Silicon Ranch was named 2020’s “Most Forward-Thinking” company by Solar Power World. Silicon Ranch pioneered utility-scale solar in the Tennessee Valley and remains a market leader, with more than 35 operating facilities across the region. To learn more, visit siliconranch.com and follow on Facebook, Instagram, Twitter, and LinkedIn.