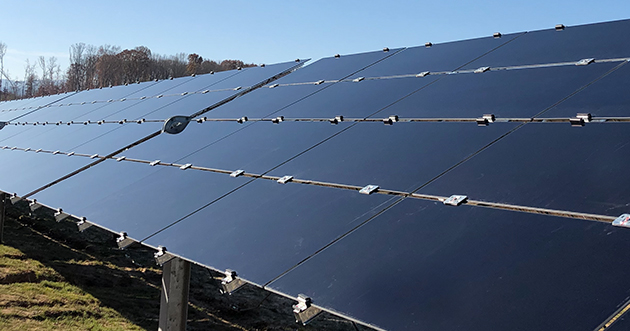 JOHNSON CITY -- BrightRidge is partnering with Silicon Ranch to build a new 9 MW solar farm in western Washington County under the flexible terms of BrightRidge’s new 20-year Partnership Agreement with the Tennessee Valley Authority.
Historically, local power companies were required to sell all electricity they generated directly to TVA. This year, TVA included a flexible generation provision in its new contracts with local power companies that enables LPCs to generate clean energy to lower costs and support their communities.

“Generation flexibility is something we have strongly encouraged for quite some time as a way to allow local power companies to respond to the specific needs of our business and residential customers,” BrightRidge CEO Jeff Dykes said. “We know an important segment of our community is very interested in alternative forms of cleaner energy generation. At the same time, we are seeing across the country that having adequate solar generation available is a critical economic development recruitment tool.”
TVA is a national leader in carbon reduction – double the national utility average. And TVA is implementing a plan to further reduce carbon emissions by 70% from 2005 levels over the next 10 years.
“TVA is building the energy system of the future, and we’re thrilled for our partners at BrightRidge to lead the way employing this newly enabled option to grow renewables in the Valley,” said Doug Perry, TVA Senior Vice President of Commercial Energy Solutions. “Together, we’ll chart an innovative path to meet local customer needs with local renewable energy.”
BrightRidge led the way in Northeast Tennessee solar production under the former TVA Distributed Solar Solutions program, partnering with Nashville-based solar producer Silicon Ranch for the region’s first 5 MW Solar Farm in Telford, which went online early in 2019. BrightRidge’s share of production from the Telford Solar Farm is distributed under a Community Solar program with residential and commercial customers.

“Silicon Ranch is a proven and skilled operator, and by pooling customers’ alternative generation needs, customers can reap the benefits of solar power while avoiding costly long-term upkeep and maintenance,” Dykes said. “Flexibility in generation contracts was the key to making this happen in our region on a much larger scale.”
Nashville-based Silicon Ranch is the U.S. solar platform for Shell and one of the largest independent solar power producers in the country, operating 135 facilities across 14 states from New York to California.
“Silicon Ranch is honored to expand our relationship with BrightRidge, which represents the best of public power through its commitment to deliver value to the customers and communities it serves,” said Silicon Ranch Co-Founder and CEO Reagan Farr. “Today truly marks a milestone, not only for this community and our partners, but also for the entire Tennessee Valley. We applaud TVA for empowering LPCs to leverage low-cost renewable energy to meet customer needs and recruit new business.”
The new project, nearly double the output of the Telford farm’s production, will be offered to area schools and institutions interested in offsetting some of their electricity needs with cleaner energy sources, while avoiding ongoing maintenance and operational concerns.
“If approved, our area school systems could save significant dollars on their power costs, lowering the cost to taxpayers who support those systems,” Dykes said. “This is truly a win-win project for the community.”
Under the new power contract, BrightRidge can build or buy up to 5 percent of its annual electric load capacity in generation.
For the Martin Solar Farm, located on 100 acres in western Washington County, Silicon Ranch will install more than 25,000 solar modules capable of producing up to 9 MW AC power. The project is anticipated to be completed and online at the end of 2021.
The project is named after the late Ralph Martin, who served many years as director of the Johnson City Power Board, which became BrightRidge in 2017.